Blinkenlights, for instance.
It’s so hard to believe that it’s already almost been 3 years since my last post here.
Well, I did have to hack my own site – I didn’t remember the admin password. Still, it’s not really like nothing did happen in the meantime, just nothing that I felt was finished enough to merit a post – like, the experimental work I did on the faster cpu. Or the ideas I had for adding sdhc support. And then there were the preliminary discussions on Oscar’s PiDP11, and whether or not I could interface my vhdl pdp11 to that. Somehow all of that was still in the not-quite-ready-for-posting stage until now… and maybe it’s showing my age, I like to make things public when they’re finished and real, even though the current fashion is to start shouting when you’ve just got a plan but can’t be sure if it’ll ever fly yet.
Anyway, it’s real enough now, I’ve got a few setups blinking their lights at me now. No, the vhdl for the console interface isn’t quite ready yet, but the tricky bits are done. Since the pinouts of Oscar’s PiDP11, and the Raspberry Pi interface to that, don’t quite match the pinouts of the fpga boards, it looks like there’ll have to be a converter board – a ‘shim’, we’re calling it for now. And since there will be a couple pins left on the 40-pin interface, I’ll most likely add the bare essential peripherals to that shim too – most likely it’ll work out to just enough to connect a serial console and a sd card. Center of development now is the DE0-NANO board from Terasic – a big fpga with lots of IO connectors, a very good build quality, and widely available for about USD 80 – it’s unbeatable. But probably most of Terasic’s other boards will do fine as well, if they have two of the 40-pin connectors and if the fpga is big enough – I’m not sure that DE0 (without the -NANO) will still be big enough. Why two of the 40-pin connectors, you might ask, if the console is clearly using just one? well, I’m planning for a peripheral board and that would use the other connector. 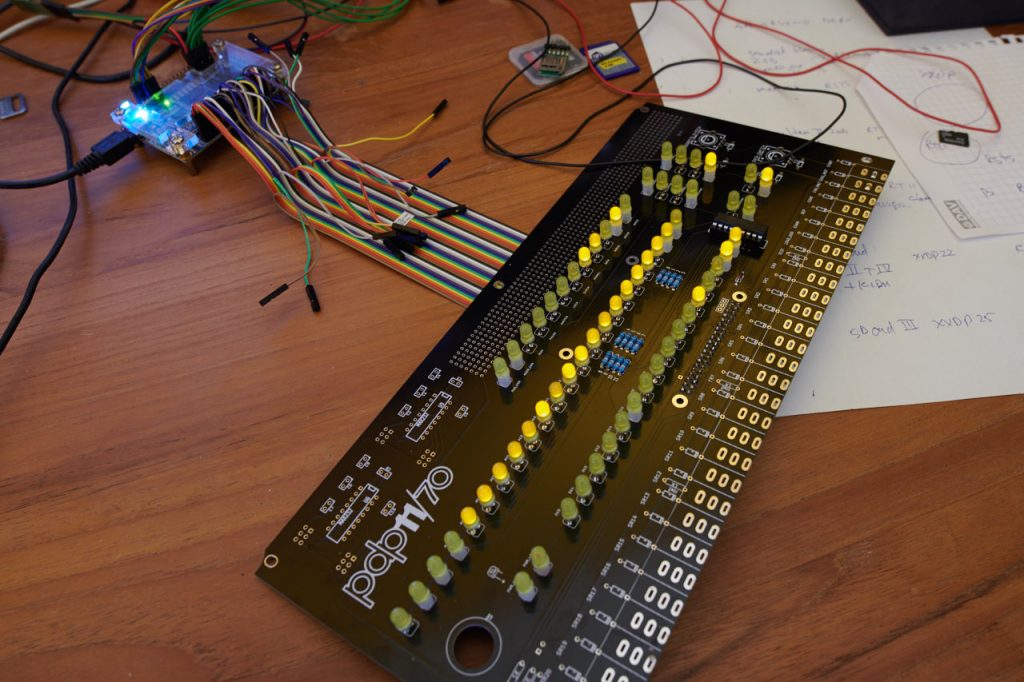 No that isn’t what the console will look like when it’s finished – it’s one of the pre-production boards that Oscar gave me to start development on, and what we call the ‘lab test animal’. Oscar fished it out of the bin for me to play with – the holes are not aligned correctly so it won’t fit nicely in the case, and the leds are not the right colour either, obviously – but it’s just fine for the development I’m now doing. Just to show you the setup that I’m now working on 😉
Functionally, most of the lights and switches already work. Most of the work still to be done is around the rotary switches (with the mmu console modes) and some of the lights that the fpga PDP11 never needed – such as the run/pause/master, for instance. That might still take lots of time, but it’s getting there.
The finished console of course has the nice switches and rich red leds, and the beautiful panel to hide the PCB behind. And of course the custom injection molded  case… check Oscar’s site at http://obsolescence.wixsite.com/obsolescence/pidp-11 to see more. 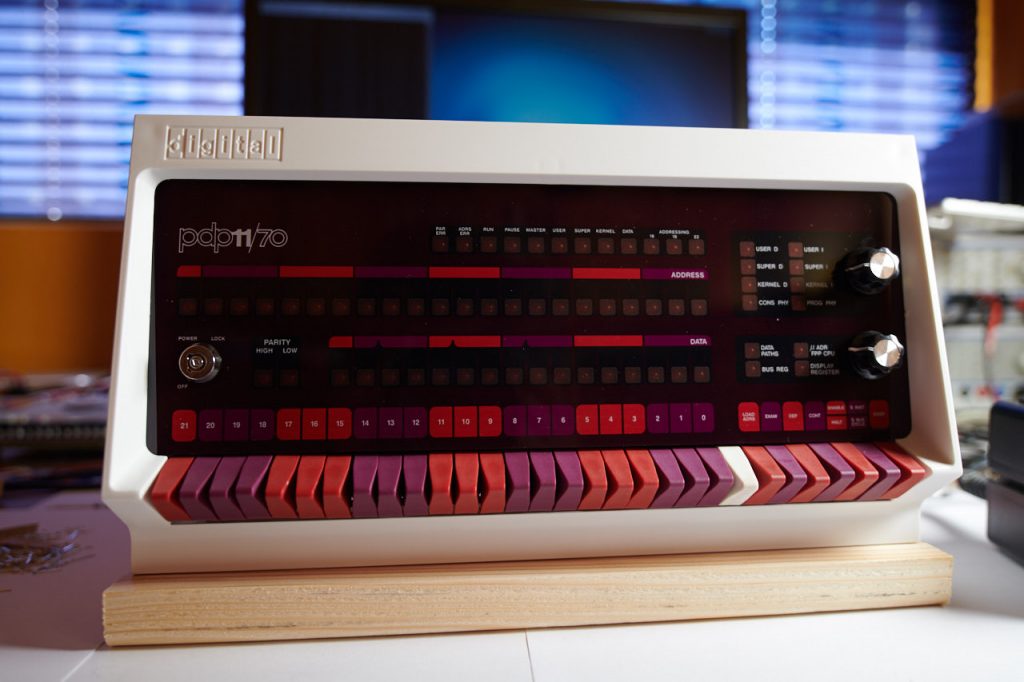 That’s my setup that’s now running Oscar’s PiDP11 for comparison and for playing, obviously! And, note how the white lamp test switch is not quite aligned with the rest of the switches, that’s entirely my fault in being in too much of a hurry to build the kit…
So that’s it for today, and I’ll try to post a bit more regular to keep you up to speed on what’s going on with the PDP2011. Over the next weeks I’ll be working to get the vhdl for the front panel working correctly, and also to get the design of the shim finalised. Hope to get that done before the summer comes 😉